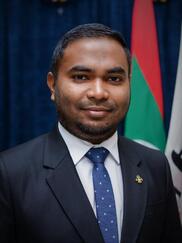 Honorable, Uz. Mahaz Ali Zahir was was born in G. Dh. Madaveli, on 31st August 1984. Uz. Mahaz attained LLB at Maldives College of Higher Education (now Maldives National University) in 2007. He completed LLM at International Islamic University (IIUM), in 2010.
On 17th August, 2007 Uz. Mahaz was acquired the license to practice law in Maldivian courts. He worked as an Assistant State Attorney at the Attorney General’s Office from 17th February 2008 to 7th September 2008. With the inception of Prosecutor General's Office in 2008 and the transference of criminal cases previously undertaken by the Attorney General's Office to Prosecutor General’s Office, he worked to prosecute criminal cases as an Assistant Public Prosecutor, at the Prosecutor General’s Office. During his tenure at Prosecutor General’s Office, he represented the State in Lower and Superior Courts, as well as taking part in drafting several prominent legislations.
With the enactment of Drug Act (Law No: 17/2011), Uz. Mahaz was appointed to the Drug Court as a Judge. At Drug Court Uz. Mahaz, played an integral role in the development of Drug Court and formulation of the regulations required by the Drug Act.
On 4th November, 2019 Uz. Mahaz was appointed as a Judge of the Supreme Court.

Participation in conferences and seminars