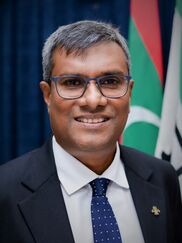 Ahmed Muthasim Adnan, Chief Justice of the Maldives,
was born in Male’, Maldives on 9 February 1965. He married Fathimath Azlifa in 1989, and they have 3 boys – Hussain, Mohamed, and Ismail. He received an LL.B. from the University of Buckingham, England, in 1992 and an M.Phil. from the University of Glasgow, Scotland, in 1994. He served as Director Legal Affairs of the Ministry of Foreign Affairs from 1994 - 2001. In 2001, he was appointed the Dean of the newly formed Faculty of Sharia and Law of the now Maldives National University. He served there till 2005. From 2005 – 2010, he was a Partner of Clipper & Galleon, a law firm in the Maldives. He also served as a member of the Human Rights Commission of the Maldives, the Law Commission of the Maldives and the Foreign Investment Board of the Maldives. In 2010, President Mohamed Nasheed nominated him as one of the first Justices of the newly formed Supreme Court of the Maldives by the Constitution of Maldives (2008). He served as a Justice of the Supreme Court till the end of 2014. In 2019, President Ibrahim Mohamed Solih nominated him as the Chief Justice of the Maldives. He took the oath of office on 8 December 2019.